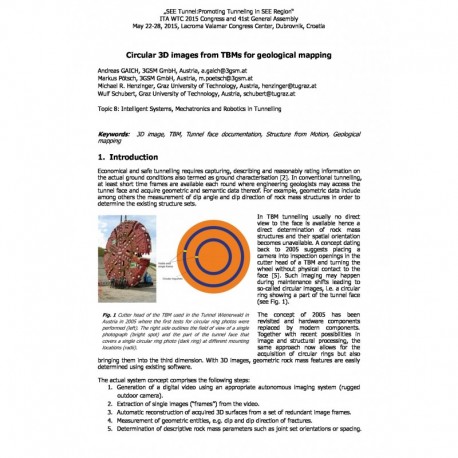 Economical and safe tunnelling requires capturing, describing and reasonably rating information on the actual ground conditions also termed as ground characterisation In conventional tunnelling, at least short time frames are available each round where engineering geologists may access the tunnel face and acquire geometric and semantic data thereof. For example, geometric data include among others the measurement of dip angle and dip direction of rock mass structures in order to determine the existing structure sets. In TBM tunnelling usually no direct view to the face is available hence a direct determination of rock mass structures and their spatial orientation becomes unavailable. A concept dating back to 2005 suggests placing a camera into inspection openings in the cutter head of a TBM and turning the wheel without physical contact to the face Such imaging may happen during maintenance shifts leading to so-called circular images, i.e. a circular ring showing a part of the tunnel face (see Fig. 1). The concept of 2005 has been revisited and hardware components replaced by modern components. Together with recent possibilities in image and structural processing, the same approach now allows for the acquisition of circular rings but also bringing them into the third dimension. With 3D images, geometric rock mass features are easily determined using existing software. The actual system concept comprises the following steps: 1.Generation of a digital video using an appropriate autonomous imaging system (rugged outdoor camera). 2.Extraction of single images (“frames”) from the video. 3.Automatic reconstruction of acquired 3D surfaces from a set of redundant image frames. 4.Measurement of geometric entities, e.g. dip and dip direction of fractures. 5.Determination of descriptive rock mass parameters such as joint set orientations or spacing.