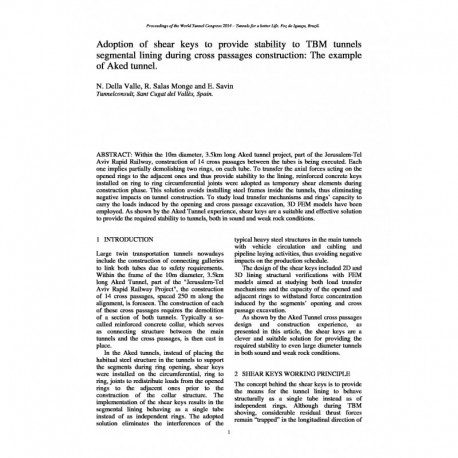 Within the 10m diameter, 3.5km long Aked tunnel project, part of the Jerusalem-Tel Aviv Rapid Railway, construction of 14 cross passages between the tubes is being executed. Each one implies partially demolishing two rings, on each tube. To transfer the axial forces acting on the opened rings to the adjacent ones and thus provide stability to the lining, reinforced concrete keys installed on ring to ring circumferential joints were adopted as temporary shear elements during construction phase. This solution avoids installing steel frames inside the tunnels, thus eliminating negative impacts on tunnel construction. To study load transfer mechanisms and rings’ capacity to carry the loads induced by the opening and cross passage excavation, 3D FEM models have been employed. As shown by the Aked Tunnel experience, shear keys are a suitable and effective solution to provide the required stability to tunnels, both in sound and weak rock conditions.