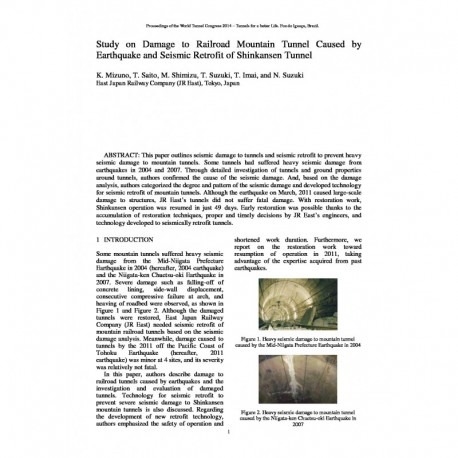 This paper outlines seismic damage to tunnels and seismic retrofit to prevent heavy seismic damage to mountain tunnels. Some tunnels had suffered heavy seismic damage from earthquakes in 2004 and 2007. Through detailed investigation of tunnels and ground properties around tunnels, authors confirmed the cause of the seismic damage. And, based on the damage analysis, authors categorized the degree and pattern of the seismic damage and developed technology for seismic retrofit of mountain tunnels. Although the earthquake on March, 2011 caused large-scale damage to structures, JR East’s tunnels did not suffer fatal damage. With restoration work, Shinkansen operation was resumed in just 49 days. Early restoration was possible thanks to the accumulation of restoration techniques, proper and timely decisions by JR East’s engineers, and technology developed to seismically retrofit tunnels.