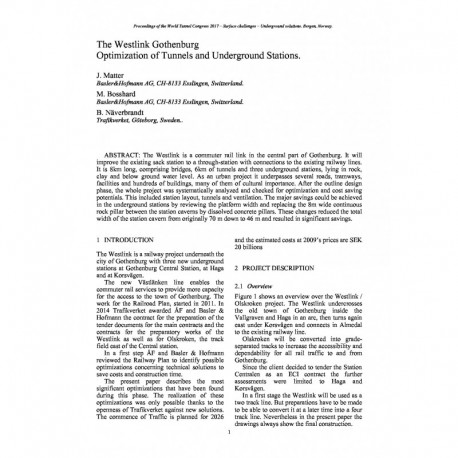 The Westlink Gothenburg Optimization of Tunnels and Underground Stations

The Westlink is a commuter rail link in the central part of Gothenburg. It will improve the existing sack station to a through-station with connections to the existing railway lines. It is 8km long, comprising bridges, 6km of tunnels and three underground stations, lying in rock, clay and below ground water level. As an urban project it underpasses several roads, tramways, facilities and hundreds of buildings, many of them of cultural importance. After the outline design phase, the whole project was systematically analyzed and checked for optimization and cost saving potentials. This included station layout, tunnels and ventilation. The major savings could be achieved in the underground stations by reviewing the platform width and replacing the 8m wide continuous rock pillar between the station caverns by dissolved concrete pillars. These changes reduced the total width of the station cavern from originally 70 m down to 46 m and resulted in significant savings.