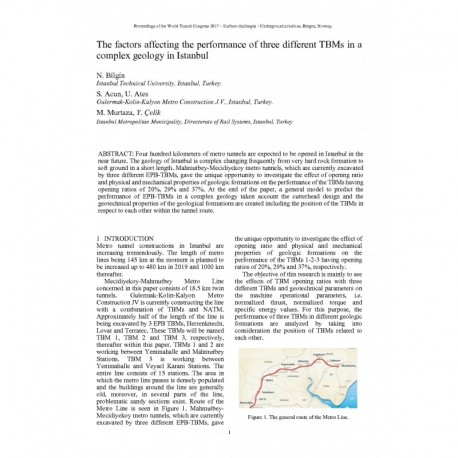 Four hundred kilometers of metro tunnels are expected to be opened in Istanbul in the near future. The geology of Istanbul is complex changing frequently from very hard rock formation to soft ground in a short length. Mahmutbey-Mecidiyekoy metro tunnels, which are currently excavated by three different EPB-TBMs, gave the unique opportunity to investigate the effect of opening ratio and physical and mechanical properties of geologic formations on the performance of the TBMs having opening ratios of 20%, 29% and 37%. At the end of the paper, a general model to predict the performance of EPB-TBMs in a complex geology taken account the cutterhead design and the geotechnical properties of the geological formations are created including the position of the TBMs in respect to each other within the tunnel route.