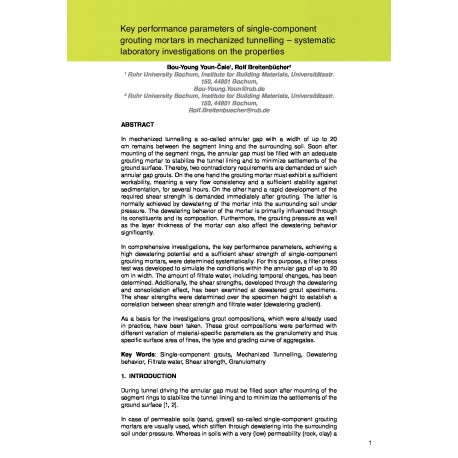 In mechanized tunnelling a so-called annular gap with a width of up to 20 cm remains between the segment lining and the surrounding soil. Soon after mounting of the segment rings, the annular gap must be filled with an adequate grouting mortar to stabilize the tunnel lining and to minimize settlements of the ground surface. Thereby, two contradictory requirements are demanded on such annular gap grouts. On the one hand the grouting mortar must exhibit a sufficient workability, meaning a very flow consistency and a sufficient stability against sedimentation, for several hours. On the other hand a rapid development of the required shear strength is demanded immediately after grouting. The latter is normally achieved by dewatering of the mortar into the surrounding soil under pressure. The dewatering behavior of the mortar is primarily influenced through its constituents and its composition. Furthermore, the grouting pressure as well as the layer thickness of the mortar can also affect the dewatering behavior significantly. In comprehensive investigations, the key performance parameters, achieving a high dewatering potential and a sufficient shear strength of single-component grouting mortars, were determined systematically. For this purpose, a filter press test was developed to simulate the conditions within the annular gap of up to 20 cm in width. The amount of filtrate water, including temporal changes, has been determined. Additionally, the shear strengths, developed through the dewatering and consolidation effect, has been examined at dewatered grout specimens. The shear strengths were determined over the specimen height to establish a correlation between shear strength and filtrate water (dewatering gradient). As a basis for the investigations grout compositions, which were already used in practice, have been taken. These grout compositions were performed with different variation of material-specific parameters as the granulometry and thus specific surface area of fines, the type and grading curve of aggregates.