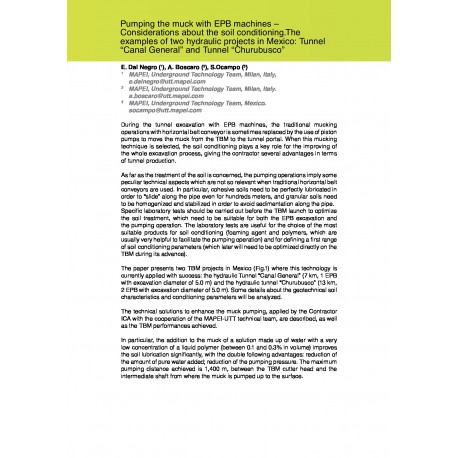 During the tunnel excavation with EPB machines, the traditional mucking operations with horizontal belt conveyor is sometimes replaced by the use of piston pumps to move the muck from the TBM to the tunnel portal. When this mucking technique is selected, the soil conditioning plays a key role for the improving of the whole excavation process, giving the contractor several advantages in terms of tunnel production.As far as the treatment of the soil is concerned, the pumping operations imply some peculiar technical aspects which are not so relevant when traditional horizontal belt conveyors are used. In particular, cohesive soils need to be perfectly lubricated in order to “slide” along the pipe even for hundreds meters, and granular soils need to be homogenized and stabilized in order to avoid sedimentation along the pipe. Specifc laboratory tests should be carried out before the TBM launch to optimize the soil treatment, which need to be suitable for both the EPB excavation and the pumping operation. The laboratory tests are useful for the choice of the most suitable products for soil conditioning (foaming agent and polymers, which are usually very helpful to facilitate the pumping operation) and for defning a frst range of soil conditioning parameters (which later will need to be optimized directly on the TBM during its advance). The paper presents two TBM projects in Mexico (Fig.1) where this technology is currently applied with success: the hydraulic Tunnel “Canal General” (7 km, 1 EPB with excavation diameter of 5.0 m) and the hydraulic tunnel “Churubusco” (13 km, 2 EPB with excavation diameter of 5.0 m). Some details about the geotechnical soil characteristics and conditioning parameters will be analyzed. The technical solutions to enhance the muck pumping, applied by the Contractor ICA with the cooperation of the MAPEI-UTT technical team, are described, as well as the TBM performances achieved. In particular, the addition to the muck of a solution made up of water with a very low concentration of a liquid polymer (between 0.1 and 0.3% in volume) improves the soil lubrication signifcantly, with the double following advantages: reduction of the amount of pure water added; reduction of the pumping pressure. The maximum pumping distance achieved is 1,400 m, between the TBM cutter head and the intermediate shaft from where the muck is pumped up to the surface.