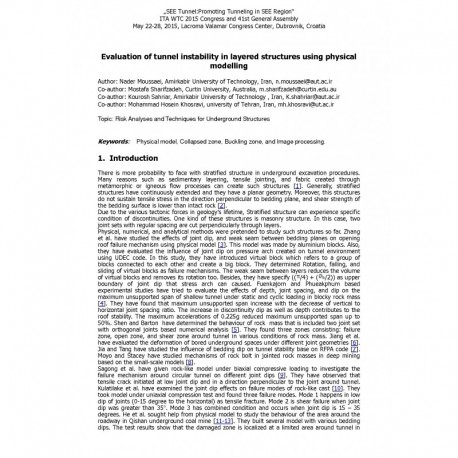 There is more probability to face with stratified structure in underground excavation procedures. Many reasons such as sedimentary layering, tensile jointing, and fabric created through metamorphic or igneous flow processes can create such structures []. Generally, stratified structures have continuously extended and they have a planar geometry. Moreover, this structures do not sustain tensile stress in the direction perpendicular to bedding plane, and shear strength of the bedding surface is lower than intact rock []. Due to the various tectonic forces in geology’s lifetime, Stratified structure can experience specific condition of discontinuities. One kind of these structures is masonry structure. In this case, two joint sets with regular spacing are cut perpendicularly through layers. Physical, numerical, and analytical methods were pretended to study such structures so far. Zhang et al. have studied the effects of joint dip, and weak seam between bedding planes on opening roof failure mechanism using physical model []. This model was made by aluminium blocks. Also, they have evaluated the influence of joint dip on pressure arch created on tunnel environment using UDEC code. In this study, they have introduced virtual block which refers to a group of blocks connected to each other and create a big block. They determined Rotation, falling, and sliding of virtual blocks as failure mechanisms. The weak seam between layers reduces the volume of virtual blocks and removes its rotation too. Besides, they have specify (( /4) + ( /2)) as upper boundary of joint dip that stress arch can caused. Fuenkajorn and Phueakphum based experimental studies have tried to evaluate the effects of depth, joint spacing, and dip on the maximum unsupported span of shallow tunnel under static and cyclic loading in blocky rock mass []. They have found that maximum unsupported span increase with the decrease of vertical to horizontal joint spacing ratio. The increase in discontinuity dip as well as depth contributes to the roof stability. The maximum accelerations of 0.225g reduced maximum unsupported span up to 50%. Shen and Barton have determined the behaviour of rock mass that is included two joint set with orthogonal joints based numerical analysis []. They found three zones consisting: failure zone, open zone, and shear zone around tunnel in various conditions of rock mass. Jiang et al. have evaluated the deformation of bored underground spaces under different joint geometries []. Jia and Tang have studied the influence of bedding dip on tunnel stability base on RFPA code []. Moyo and Stacey have studied mechanisms of rock bolt in jointed rock masses in deep mining based on the small-scale models []. Sagong et al. have given rock-like model under biaxial compressive loading to investigate the failure mechanism around circular tunnel on different joint dips []. They have observed that tensile crack initiated at low joint dip and in a direction perpendicular to the joint around tunnel. Kulatilake et al. have examined the joint dip effects on failure modes of rock-like cast []. They took model under uniaxial compression test and found three failure modes. Mode 1 happens in low dip of joints (0-15 degree to the horizontal) as tensile fracture. Mode 2 is shear failure when joint dip was greater than 35. Mode 3 has combined condition and occurs when joint dip is 15 – 35 degrees. He et al. sought help from physical model to study the behaviour of the area around the roadway in Qishan underground coal mine []. They built several model with various bedding dips. The test results show that the damaged zone is localized at a limited area around tunnel in