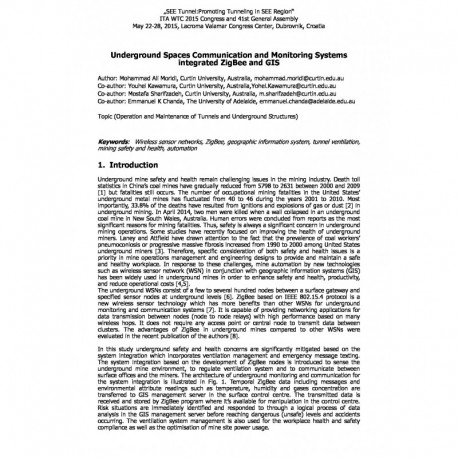 Underground mine safety and health remain challenging issues in the mining industry. Death toll statistics in China’s coal mines have gradually reduced from 5798 to 2631 between 2000 and 2009 [1] but fatalities still occurs. The number of occupational mining fatalities in the United States’ underground metal mines has fluctuated from 40 to 46 during the years 2001 to 2010. Most importantly, 33.8% of the deaths have resulted from ignitions and explosions of gas or dust [2] in underground mining. In April 2014, two men were killed when a wall collapsed in an underground coal mine in New South Wales, Australia. Human errors were concluded from reports as the most significant reasons for mining fatalities. Thus, safety is always a significant concern in underground mining operations. Some studies have recently focused on improving the health of underground miners. Laney and Attfield have drawn attention to the fact that the prevalence of coal workers’ pneumoconiosis or progressive massive fibrosis increased from 1990 to 2000 among United States underground miners [3]. Therefore, specific consideration of both safety and health issues is a priority in mine operations management and engineering designs to provide and maintain a safe and healthy workplace. In response to these challenges, mine automation by new technologies such as wireless sensor network (WSN) in conjunction with geographic information systems (GIS) has been widely used in underground mines in order to enhance safety and health, productivity, and reduce operational costs [4,5]. The underground WSNs consist of a few to several hundred nodes between a surface gateway and specified sensor nodes at underground levels [6]. ZigBee based on IEEE 802.15.4 protocol is a new wireless sensor technology which has more benefits than other WSNs for underground monitoring and communication systems [7]. It is capable of providing networking applications for data transmission between nodes (node to node relays) with high performance based on many wireless hops. It does not require any access point or central node to transmit data between clusters. The advantages of ZigBee in underground mines compared to other WSNs were evaluated in the recent publication of the authors [8]. In this study underground safety and health concerns are significantly mitigated based on the system integration which incorporates ventilation management and emergency message texting. The system integration based on the development of ZigBee nodes is introduced to sense the underground mine environment, to regulate ventilation system and to communicate between surface offices and the miners. The architecture of underground monitoring and communication for the system integration is illustrated in Fig. 1. Temporal ZigBee data including messages and environmental attribute readings such as temperature, humidity and gases concentration are transferred to GIS management server in the surface control centre. The transmitted data is received and stored by ZigBee program where it’s available for manipulation in the control centre. Risk situations are immediately identified and responded to through a logical process of data analysis in the GIS management server before reaching dangerous (unsafe) levels and accidents occurring. The ventilation system management is also used for the workplace health and safety compliance as well as the optimisation of mine site power usage.