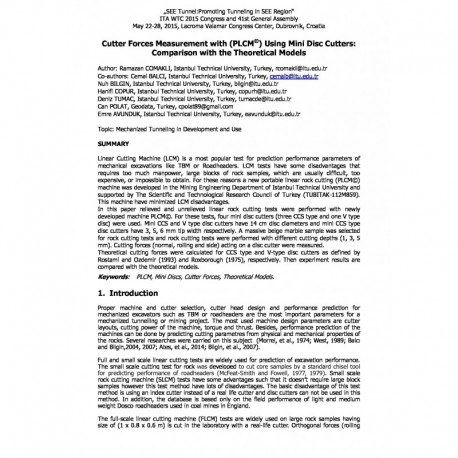 Cutter Forces Measurement with (PLCM ) Comparison with the Theoretical Models

Proper machine and cutter selection, cutter head design and performance prediction for mechanized excavators such as TBM or roadheaders are the most important parameters for a mechanized tunnelling or mining project. The most used machine design parameters are cutter layouts, cutting power of the machine, torque and thrust. Besides, performance prediction of the machines can be done by predicting cutting parametres from physical and mechanical properties of the rocks. Several researches were carried on this subject (Morrel, et al., 1974; West, 1989; Balcı and Bilgin,2004, 2007; Ates, et al., 2014; Bilgin, et al., 2007). Full and small scale linear cutting tests are widely used for prediction of excavation performance. The small scale cutting test for rock was developed to cut core samples by a standard chisel tool for predicting performance of roadheaders (McFeat-Smith and Fowell, 1977, 1979). Small scale rock cutting machine (SLCM) tests have some advantages such that it doesn’t require large block samples however this test method have lots of disadvantages. The basic disadvantage of this test method is using an index cutter instead of a real life cutter and disc cutters can not be used in this method. In addition, the database is based only on the field performance of light and medium weight Dosco roadheaders used in coal mines in England. The full-scale linear cutting machine (FLCM) tests are widely used on large rock samples having size of (1 x 0.8 x 0.6 m) is cut in the laboratory with a real-life cutter. Orthogonal forces (rolling