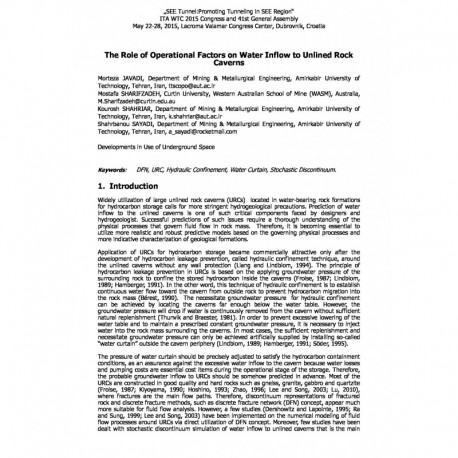 Widely utilization of large unlined rock caverns (URCs) located in water-bearing rock formations for hydrocarbon storage calls for more stringent hydrogeological precautions. Prediction of water inflow to the unlined caverns is one of such critical components faced by designers and hydrogeologist. Successful predictions of such issues require a thorough understanding of the physical processes that govern fluid flow in rock mass. Therefore, it is becoming essential to utilize more realistic and robust predictive models based on the governing physical processes and more indicative characterization of geological formations. Application of URCs for hydrocarbon storage became commercially attractive only after the development of hydrocarbon leakage prevention, called hydraulic confinement technique, around the unlined caverns without any wall protection (Liang and Lindblom, 1994). The principle of hydrocarbon leakage prevention in URCs is based on the applying groundwater pressure of the surrounding rock to confine the stored hydrocarbon inside the caverns (Froise, 1987; Lindblom, 1989; Hamberger, 1991). In the other word, this technique of hydraulic confinement is to establish continuous water flow toward the cavern from outside rock to prevent hydrocarbon migration into the rock mass (Bérest, 1990). The necessitate groundwater pressure for hydraulic confinement can be achieved by locating the caverns far enough below the water table. However, the groundwater pressure will drop if water is continuously removed from the cavern without sufficient natural replenishment (Thunvik and Braester, 1981). In order to prevent excessive lowering of the water table and to maintain a prescribed constant groundwater pressure, it is necessary to inject water into the rock mass surrounding the caverns. In most cases, the sufficient replenishment and necessitate groundwater pressure can only be achieved artificially supplied by installing so-called “water curtain” outside the cavern periphery (Lindblom, 1989; Hamberger, 1991; Söder, 1995). The pressure of water curtain should be precisely adjusted to satisfy the hydrocarbon containment conditions, as an assurance against the excessive water inflow to the cavern because water losses and pumping costs are essential cost items during the operational stage of the storage. Therefore, the probable groundwater inflow to URCs should be somehow predicted in advance. Most of the URCs are constructed in good quality and hard rocks such as gneiss, granite, gabbro and quartzite (Froise, 1987; Kiyoyama, 1990; Hoshino, 1993; Zhao, 1996; Lee and Song, 2003; Lu, 2010), where fractures are the main flow paths. Therefore, discontinuum representations of fractured rock and discrete fracture methods, such as discrete fracture network (DFN) concept, appear much more suitable for fluid flow analysis. However, a few studies (Dershowitz and Lapointe, 1995; Ra and Sung, 1999; Lee and Song, 2003) have been implemented on the numerical modeling of fluid flow processes around URCs via direct utilization of DFN concept. Moreover, few studies have been dealt with stochastic discontinuum simulation of water inflow to unlined caverns that is the main