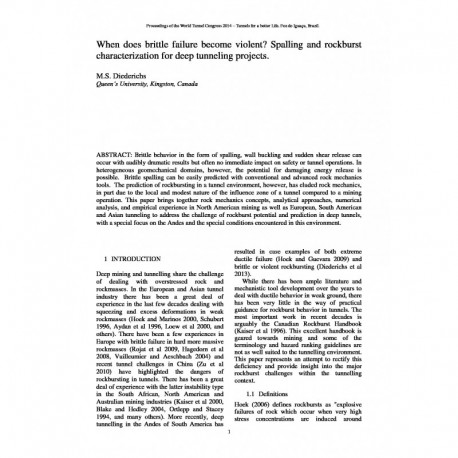 Brittle behavior in the form of spalling, wall buckling and sudden shear release can occur with audibly dramatic results but often no immediate impact on safety or tunnel operations. In heterogeneous geomechanical domains, however, the potential for damaging energy release is possible. Brittle spalling can be easily predicted with conventional and advanced rock mechanics tools. The prediction of rockbursting in a tunnel environment, however, has eluded rock mechanics, in part due to the local and modest nature of the influence zone of a tunnel compared to a mining operation. This paper brings together rock mechanics concepts, analytical approaches, numerical analysis, and empirical experience in North American mining as well as European, South American and Asian tunneling to address the challenge of rockburst potential and prediction in deep tunnels, with a special focus on the Andes and the special conditions encountered in this environment.