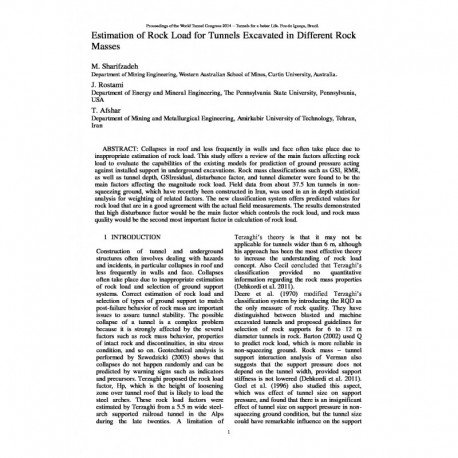 Collapses in roof and less frequently in walls and face often take place due to inappropriate estimation of rock load. This study offers a review of the main factors affecting rock load to evaluate the capabilities of the existing models for prediction of ground pressure acting against installed support in underground excavations. Rock mass classifications such as GSI, RMR, as well as tunnel depth, GSIresidual, disturbance factor, and tunnel diameter were found to be the main factors affecting the magnitude rock load. Field data from about 37.5 km tunnels in nonsqueezing ground, which have recently been constructed in Iran, was used in an in depth statisticalanalysis for weighting of related factors. The new classification system offers predicted values for rock load that are in a good agreement with the actual field measurements. The results demonstrated that high disturbance factor would be the main factor which controls the rock load, and rock mass quality would be the second most important factor in calculation of rock load.