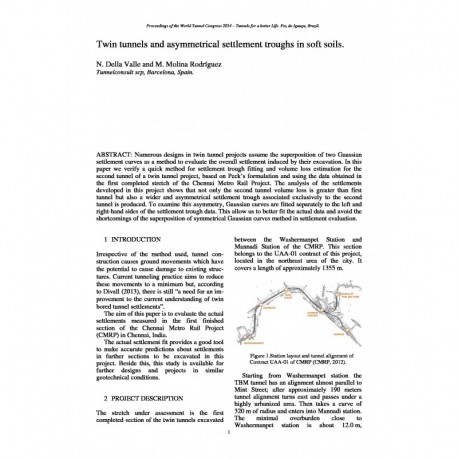 Numerous designs in twin tunnel projects assume the superposition of two Gaussian settlement curves as a method to evaluate the overall settlement induced by their excavation. In this paper we verify a quick method for settlement trough fitting and volume loss estimation for the second tunnel of a twin tunnel project, based on Peck’s formulation and using the data obtained in the first completed stretch of the Chennai Metro Rail Project. The analysis of the settlements developed in this project shows that not only the second tunnel volume loss is greater than first tunnel but also a wider and asymmetrical settlement trough associated exclusively to the second tunnel is produced. To examine this asymmetry, Gaussian curves are fitted separately to the left and right-hand sides of the settlement trough data. This allow us to better fit the actual data and avoid the shortcomings of the superposition of symmetrical Gaussian curves method in settlement evaluation.