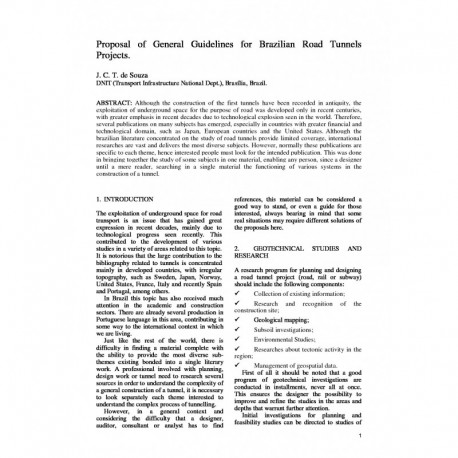 Although the construction of the first tunnels have been recorded in antiquity, the exploitation of underground space for the purpose of road was developed only in recent centuries, with greater emphasis in recent decades due to technological explosion seen in the world. Therefore, several publications on many subjects has emerged, especially in countries with greater financial and technological domain, such as Japan, European countries and the United States. Although the brazilian literature concentrated on the study of road tunnels provide limited coverage, international researches are vast and delivers the most diverse subjects. However, normally these publications are specific to each theme, hence interested people must look for the intended publication. This was done in bringing together the study of some subjects in one material, enabling any person, since a designer until a mere reader, searching in a single material the functioning of various systems in the construction of a tunnel.