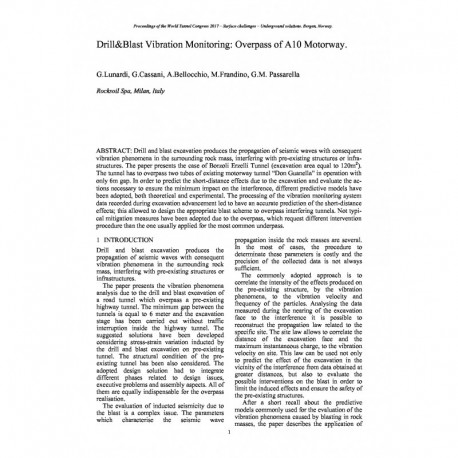 Drill and blast excavation produces the propagation of seismic waves with consequent vibration phenomena in the surrounding rock mass, interfering with pre-existing structures or infrastructures. The paper presents the case of Borzoli Erzelli Tunnel (excavation area equal to 120m). The tunnel has to overpass two tubes of existing motorway tunnel “Don Guanella” in operation with only 6m gap. In order to predict the short-distance effects due to the excavation and evaluate the actions necessary to ensure the minimum impact on the interference, different predictive models have been adopted, both theoretical and experimental. The processing of the vibration monitoring system data recorded during excavation advancement led to have an accurate prediction of the short-distance effects; this allowed to design the appropriate blast scheme to overpass interfering tunnels. Not typical mitigation measures have been adopted due to the overpass, which request different intervention procedure than the one usually applied for the most common underpass.