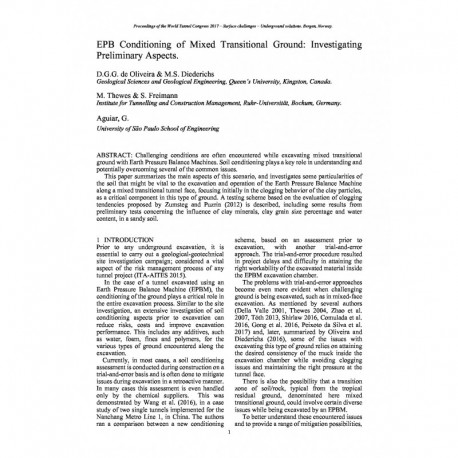 Challenging conditions are often encountered while excavating mixed transitional ground with Earth Pressure Balance Machines. Soil conditioning plays a key role in understanding and potentially overcoming several of the common issues. This paper summarizes the main aspects of this scenario, and investigates some particularities of the soil that might be vital to the excavation and operation of the Earth Pressure Balance Machine along a mixed transitional tunnel face, focusing initially in the clogging behavior of the clay particles, as a critical component in this type of ground. A testing scheme based on the evaluation of clogging tendencies proposed by Zumsteg and Puzrin (2012) is described, including some results from preliminary tests concerning the influence of clay minerals, clay grain size percentage and water content, in a sandy soil.