> Proceedings>WTC>Tunnel deformation limits and interaction with cavity support: The experience inside the exploratory tunnel of the Brenner Base Tunnel 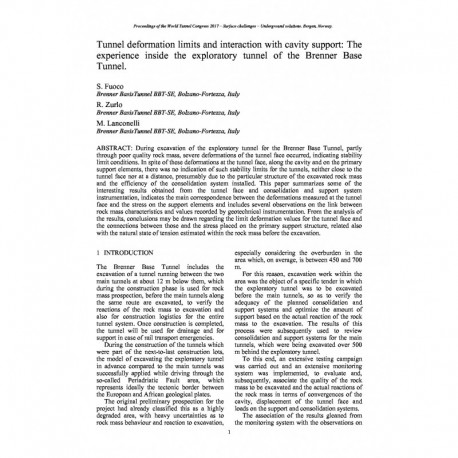 Tunnel deformation limits and interaction with cavity support: The experience inside the exploratory tunnel of the Brenner Base Tunnel

During excavation of the exploratory tunnel for the Brenner Base Tunnel, partly through poor quality rock mass, severe deformations of the tunnel face occurred, indicating stability limit conditions. In spite of these deformations at the tunnel face, along the cavity and on the primary support elements, there was no indication of such stability limits for the tunnels, neither close to the tunnel face nor at a distance, presumably due to the particular structure of the excavated rock mass and the efficiency of the consolidation system installed. This paper summarizes some of the interesting results obtained from the tunnel face and consolidation and support system instrumentation, indicates the main correspondence between the deformations measured at the tunnel face and the stress on the support elements and includes several observations on the link between rock mass characteristics and values recorded by geotechnical instrumentation. From the analysis of the results, conclusions may be drawn regarding the limit deformation values for the tunnel face and the connections between those and the stress placed on the primary support structure, related also with the natural state of tension estimated within the rock mass before the excavation.