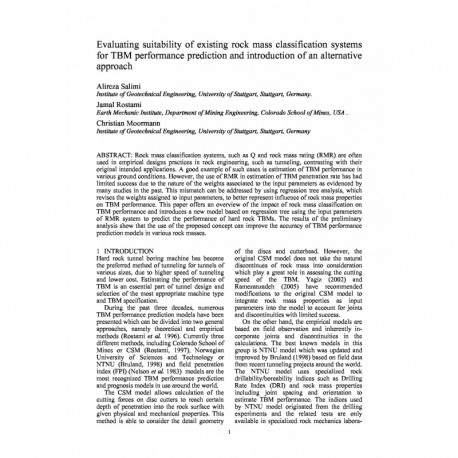 Rock mass classification systems, such as Q and rock mass rating (RMR) are often used in empirical designs practices in rock engineering, such as tunneling, contrasting with their original intended applications. A good example of such cases is estimation of TBM performance in various ground conditions. However, the use of RMR in estimation of TBM penetration rate has had limited success due to the nature of the weights associated to the input parameters as evidenced by many studies in the past. This mismatch can be addressed by using regression tree analysis, which revises the weights assigned to input parameters, to better represent influence of rock mass properties on TBM performance. This paper offers an overview of the impact of rock mass classification on TBM performance and introduces a new model based on regression tree using the input parameters of RMR system to predict the performance of hard rock TBMs. The results of the preliminary analysis show that the use of the proposed concept can improve the accuracy of TBM performance prediction models in various rock masses.