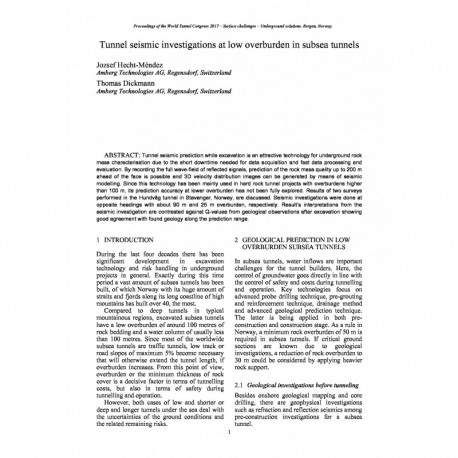 Tunnel seismic prediction while excavation is an attractive technology for underground rock mass characterisation due to the short downtime needed for data acquisition and fast data processing and evaluation. By recording the full wave-field of reflected signals, prediction of the rock mass quality up to 200 m ahead of the face is possible and 3D velocity distribution images can be generated by means of seismic modelling. Since this technology has been mainly used in hard rock tunnel projects with overburdens higher than 100 m, its prediction accuracy at lower overburden has not been fully explored. Results of two surveys performed in the Hundvåg tunnel in Stavanger, Norway, are discussed. Seismic investigations were done at opposite headings with about 90 m and 25 m overburden, respectively. Result’s interpretations from the seismic investigation are contrasted against Q-values from geological observations after excavation showing good agreement with found geology along the prediction range.