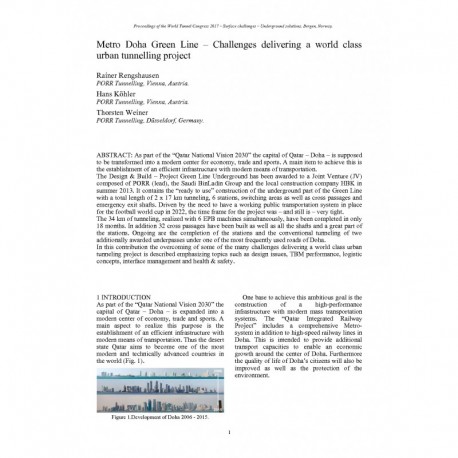 As part of the “Qatar National Vision 2030” the capital of Qatar – Doha – is supposed to be transformed into a modern center for economy, trade and sports. A main item to achieve this is the establishment of an efficient infrastructure with modern means of transportation. The Design & Build – Project Green Line Underground has been awarded to a Joint Venture (JV) composed of PORR (lead), the Saudi BinLadin Group and the local construction company HBK in summer 2013. It contains the “ready to use” construction of the underground part of the Green Line with a total length of 2 x 17 km tunneling, 6 stations, switching areas as well as cross passages and emergency exit shafts. Driven by the need to have a working public transportation system in place for the football world cup in 2022, the time frame for the project was – and still is – very tight. The 34 km of tunneling, realized with 6 EPB machines simultaneously, have been completed in only 18 months. In addition 32 cross passages have been built as well as all the shafts and a great part of the stations. Ongoing are the completion of the stations and the conventional tunneling of two additionally awarded underpasses under one of the most frequently used roads of Doha. In this contribution the overcoming of some of the many challenges delivering a world class urban tunneling project is described emphasizing topics such as design issues, TBM performance, logistic concepts, interface management and health & safety.