> Proceedings>WTC>Visual impact and safety perception on users of urban tunnels: the role of the design 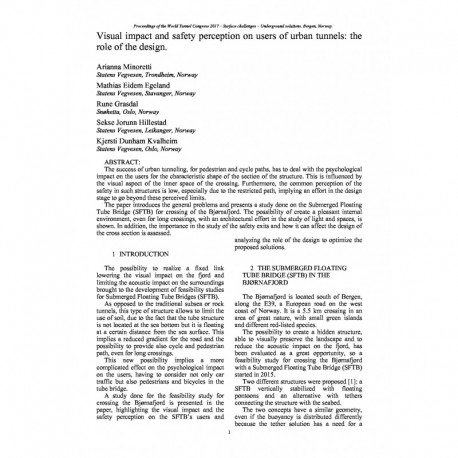 Visual impact and safety perception on users of urban tunnels: the role of the design

The success of urban tunneling, for pedestrian and cycle paths, has to deal with the psychological impact on the users for the characteristic shape of the section of the structure. This is influenced by the visual aspect of the inner space of the crossing. Furthermore, the common perception of the safety in such structures is low, especially due to the restricted path, implying an effort in the design stage to go beyond these perceived limits. The paper introduces the general problems and presents a study done on the Submerged Floating Tube Bridge (SFTB) for crossing of the Bjørnafjord. The possibility of create a pleasant internal environment, even for long crossings, with an architectural effort in the study of light and spaces, is shown. In addition, the importance in the study of the safety exits and how it can affect the design of the cross section is assessed