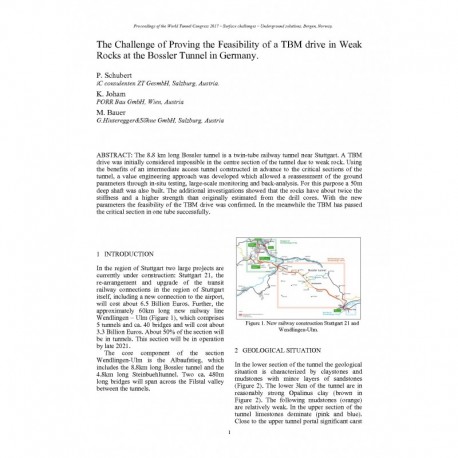 The 8.8 km long Bossler tunnel is a twin-tube railway tunnel near Stuttgart. A TBM drive was initially considered impossible in the centre section of the tunnel due to weak rock. Using the benefits of an intermediate access tunnel constructed in advance to the critical sections of the tunnel, a value engineering approach was developed which allowed a reassessment of the ground parameters through in-situ testing, large-scale monitoring and back-analysis. For this purpose a 50m deep shaft was also built. The additional investigations showed that the rocks have about twice the stiffness and a higher strength than originally estimated from the drill cores. With the new parameters the feasibility of the TBM drive was confirmed. In the meanwhile the TBM has passed the critical section in one tube successfully.