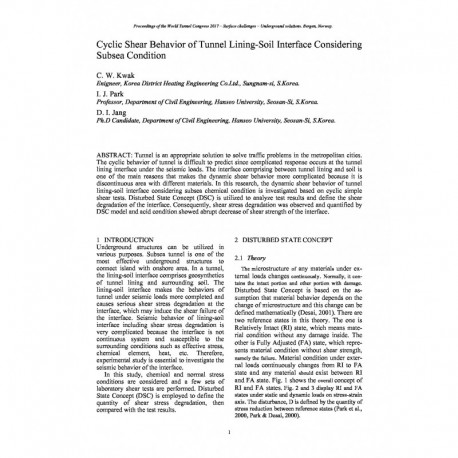 Tunnel is an appropriate solution to solve traffic problems in the metropolitan cities. The cyclic behavior of tunnel is difficult to predict since complicated response occurs at the tunnel lining interface under the seismic loads. The interface comprising between tunnel lining and soil is one of the main reasons that makes the dynamic shear behavior more complicated because it is discontinuous area with different materials. In this research, the dynamic shear behavior of tunnel lining-soil interface considering subsea chemical condition is investigated based on cyclic simple shear tests. Disturbed State Concept (DSC) is utilized to analyze test results and define the shear degradation of the interface. Consequently, shear stress degradation was observed and quantified by DSC model and acid condition showed abrupt decrease of shear strength of the interface.