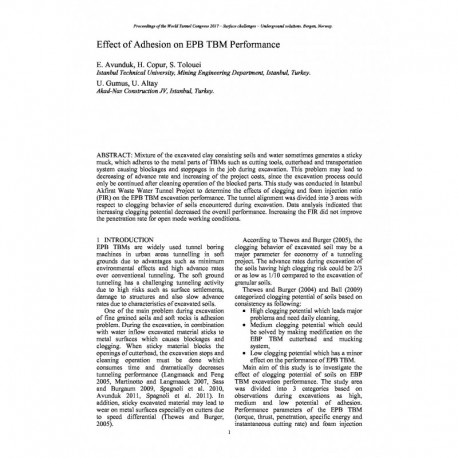 Mixture of the excavated clay consisting soils and water sometimes generates a sticky muck, which adheres to the metal parts of TBMs such as cutting tools, cutterhead and transportation system causing blockages and stoppages in the job during excavation. This problem may lead to decreasing of advance rate and increasing of the project costs, since the excavation process could only be continued after cleaning operation of the blocked parts. This study was conducted in Istanbul Akfirat Waste Water Tunnel Project to determine the effects of clogging and foam injection ratio (FIR) on the EPB TBM excavation performance. The tunnel alignment was divided into 3 areas with respect to clogging behavior of soils encountered during excavation. Data analysis indicated that increasing clogging potential decreased the overall performance. Increasing the FIR did not improve the penetration rate for open mode working conditions.