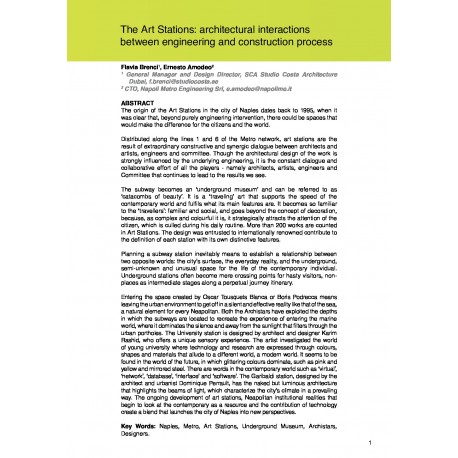 The Art Stations: architectural interactions between engineering and construction process

The origin of the Art Stations in the city of Naples dates back to 1995, when it was clear that, beyond purely engineering intervention, there could be spaces that would make the difference for the citizens and the world.Distributed along the lines 1 and 6 of the Metro network, art stations are the result of extraordinary constructive and synergic dialogue between architects and artists, engineers and committee. Though the architectural design of the work is strongly influenced by the underlying engineering, it is the constant dialogue and collaborative effort of all the players - namely architects, artists, engineers and Committee that continues to lead to the results we see.The subway becomes an ‘underground museum’ and can be referred to as ‘catacombs of beauty’. It is a ‘traveling’ art that supports the speed of the contemporary world and fulfils what its main features are. It becomes so familiar to the ‘travellers’: familiar and social, and goes beyond the concept of decoration, because, as complex and colourful it is, it strategically attracts the attention of the citizen, which is culled during his daily routine. More than 200 works are counted in Art Stations. The design was entrusted to internationally renowned contribute to the definition of each station with its own distinctive features.Planning a subway station inevitably means to establish a relationship between two opposite worlds: the city’s surface, the everyday reality, and the underground, semi-unknown and unusual space for the life of the contemporary individual. Underground stations often become mere crossing points for hasty visitors, nonplaces as intermediate stages along a perpetual journey itinerary.Entering the space created by Oscar Tousquets Blanca or Boris Podrecca means leaving the urban environment to get off in a silent and effective reality like that of the sea, a natural element for every Neapolitan. Both the Archistars have exploited the depths in which the subways are located to recreate the experience of entering the marine world, where it dominates the silence and away from the sunlight that filters through the urban portholes. The University station is designed by architect and designer Karim Rashid, who offers a unique sensory experience. The artist investigated the world of young university where technology and research are expressed through colours, shapes and materials that allude to a different world, a modern world. It seems to be found in the world of the future, in which glittering colours dominate, such as pink and yellow and mirrored steel. There are words in the contemporary world such as ‘virtual’, ‘network’, ‘database’, ‘interface’ and ‘software’. The Garibaldi station, designed by the architect and urbanist Dominique Perrault, has the naked but luminous architecture that highlights the beams of light, which characterize the city’s climate in a prevailing way.