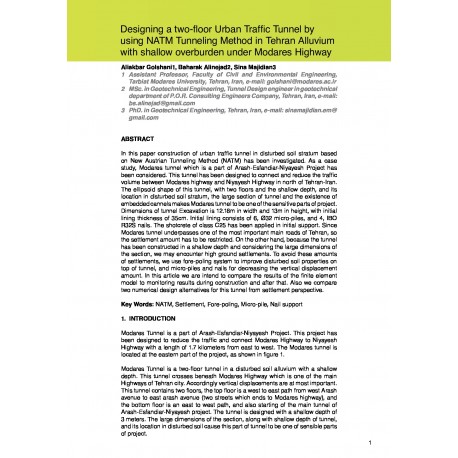 In this paper construction of urban traffic tunnel in disturbed soil stratum based on New Austrian Tunneling Method (NATM) has been investigated. As a case study, Modares tunnel which is a part of Arash-Esfandiar-Niyayesh Project has been considered. This tunnel has been designed to connect and reduce the traffic volume between Modares highway and Niyayesh Highway in north of Tehran-Iran. The ellipsoid shape of this tunnel, with two floors and the shallow depth, and its location in disturbed soil stratum, the large section of tunnel and the existence of embedded cannels makes Modares tunnel to be one of the sensitive parts of project. Dimensions of tunnel Excavation is 12.18m in width and 13m in height, with initial lining thickness of 35cm. Initial lining consists of 6, Ø32 micro-piles, and 4, IBO R32S nails. The shotcrete of class C25 has been applied in initial support. Since Modares tunnel underpasses one of the most important main roads of Tehran, so the settlement amount has to be restricted. On the other hand, because the tunnel has been constructed in a shallow depth and considering the large dimensions of the section, we may encounter high ground settlements. To avoid these amounts of settlements, we use fore-poling system to improve disturbed soil properties on top of tunnel, and micro-piles and nails for decreasing the vertical displacement amount. In this article we are intend to compare the results of the finite element model to monitoring results during construction and after that. Also we compare two numerical design alternatives for this tunnel from settlement perspective.