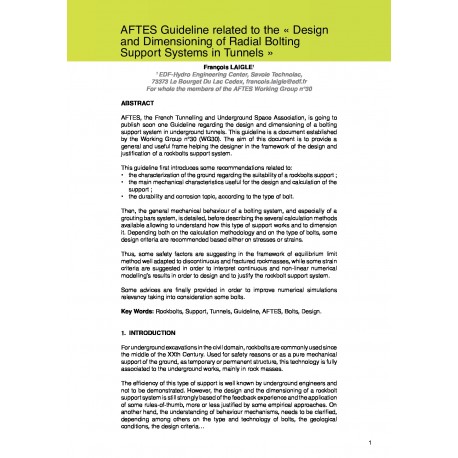 AFTES, the French Tunnelling and Underground Space Association, is going to publish soon one Guideline regarding the design and dimensioning of a bolting support system in underground tunnels. This guideline is a document established by the Working Group n°30 (WG30). The aim of this document is to provide a general and useful frame helping the designer in the framework of the design and justification of a rockbolts support system.This guideline first introduces some recommendations related to:• the characterization of the ground regarding the suitability of a rockbolts support ;• the main mechanical characteristics useful for the design and calculation of the support ;• the durability and corrosion topic, according to the type of bolt. Then, the general mechanical behaviour of a bolting system, and especially of a grouting bars system, is detailed, before describing the several calculation methods available allowing to understand how this type of support works and to dimension it. Depending both on the calculation methodology and on the type of bolts, some design criteria are recommended based either on stresses or strains. Thus, some safety factors are suggesting in the framework of equilibrium limit method well adapted to discontinuous and fractured rockmasses, while some strain criteria are suggested in order to interpret continuous and non-linear numerical modelling’s results in order to design and to justify the rockbolt support system. Some advices are finally provided in order to improve numerical simulations relevancy taking into consideration some bolts. Rockbolts, Support, Tunnels, Guideline, AFTES, Bolts, Design.