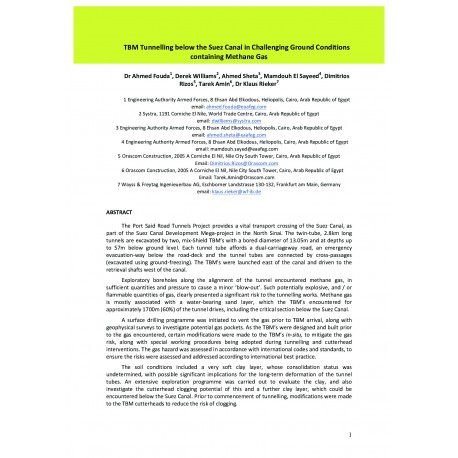 The Port Said Road Tunnels Project provides a vital transport crossing of the Suez Canal, as part of the Suez Canal Development Mega-project in the North Sinai. The twin-tube, 2.8km long tunnels are excavated by two, mix-Shield TBM’s with a bored diameter of 13.05m and at depths up to 57m below ground level. Each tunnel tube affords a dual-carriageway road, an emergency evacuation-way below the road-deck and the tunnel tubes are connected by cross-passages (excavated using ground-freezing). The TBM’s were launched east of the canal and driven to the retrieval shafts west of the canal. Exploratory boreholes along the alignment of the tunnel encountered methane gas, in sufficient quantities and pressure to cause a minor ‘blow-out’. Such potentially explosive, and / or flammable quantities of gas, clearly presented a significant risk to the tunnelling works. Methane gas is mostly associated with a water-bearing sand layer, which the TBM’s encountered for approximately 1700m (60%) of the tunnel drives, including the critical section below the Suez Canal. A surface drilling programme was initiated to vent the gas prior to TBM arrival, along with geophysical surveys to investigate potential gas pockets. As the TBM’s were designed and built prior to the gas encountered, certain modifications were made to the TBM’s to mitigate the gas risk, along with special working procedures being adopted during tunnelling and cutterhead interventions. The gas hazard was assessed in accordance with international codes and standards, to ensure the risks were assessed and addressed according to international best practice. The soil conditions included a very soft clay layer, whose consolidation status was undetermined, with possible significant implications for the long-term deformation of the tunnel tubes. An extensive exploration programme was carried out to evaluate the clay, and also investigate the cutterhead clogging potential of this and a further clay layer, which could be encountered below the Suez Canal. Prior to commencement of tunnelling, modifications were made to the TBM cutterheads to reduce the risk of clogging.