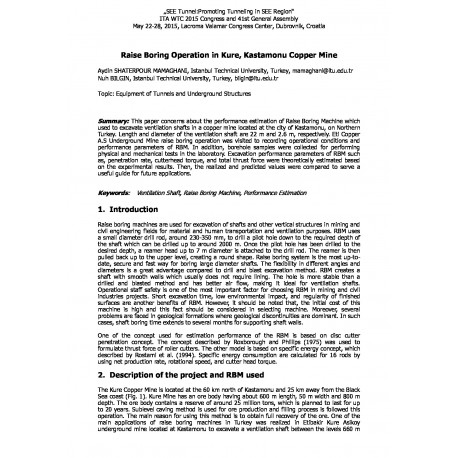 This paper concerns about the performance estimation of Raise Boring Machine which used to excavate ventilation shafts in a copper mine located at the city of Kastamonu, on Northern Turkey. Length and diameter of the ventilation shaft are 22 m and 2.6 m, respectively. Eti Copper A.S Underground Mine raise boring operation was visited to recording operational conditions and performance parameters of RBM. In addition, borehole samples were collected for performing physical and mechanical tests in the laboratory. Excavation performance parameters of RBM such as, penetration rate, cutterhead torque, and total thrust force were theoretically estimated based on the experimental results. Then, the realized and predicted values were compared to serve a useful guide for future applications.